Scroll down for the videos! 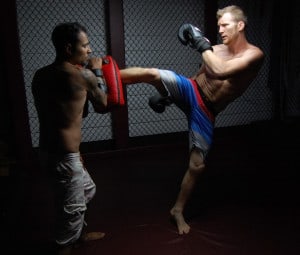 "The term "striking" basically refers to stand-up fighting. This is when you're on your feet, hitting someone with fists, elbows knees, ... your forehead... whatever. You are relying on blunt force trauma to your opponents head and body to take that sucker out".

The striking that I teach here is a combination of a few styles that I've picked up over 15 years of being punched in the face.

If you don't feel like reading about what makes my cocktail of striking styles so awesome, feel free to skip to the striking videos at the bottom of the page... my feelings won't be hurt.

Also, these aren't necessarily beginner lessons, so you might want to check out the "Basics" section if you simply want to learn how to throw a punch.

Boxing should probably be the first step when learning how to fight on your feet.  While it's limited in the number of body parts you can use to hit someone, it makes up for it with crafty footwork and making your head hard to hit.

If you box you will learn how to make people miss, you will have tremendous power in your hands, and counter-punching will become second nature.  There's really nothing quite like slipping some guy's punch, and then knocking him unconscious... it's quite breathtaking in a horrible way.

Muay Thai Kickboxing is some seriously brutal stuff.  Elbows, knees, and shins are used to smash your opponent to bits.  This art has by far the hardest strikes, and they're thrown using the hardest parts of your body... take a second and feel your elbow... that thing is no joke and the skin covering it doesn't even feel pain.  This art is limited by the lack of footwork and head movement, which is why we combine it with boxing.

Most Muay Thai fighters are perfectly content to just strike each other back and forth until someone falls.  Screw that.  Combine the brutality of Muay Thai with the elusiveness and set-up in boxing, and you become a very dangerous striker.

Dirty Boxing is stuff that would be against the rules in most martial arts.  Rabbit punches or grabbing the back of your opponent's head and ramming your fist into his face are two good examples of dirty boxing.  I don't have "rules" in my striking style.  If it works in a fight, I'm going to give it to you.

If there's a referee in your street fight, it means that you're probably dreaming, and you should throw a fireball or something.  Enjoy these lessons!

Before even teaching you how to throw a punch, I think it’s important that you understand how far away you are supposed to be from the guy you’re trying to beat the crap out of.  The correct distancing builds power and increases your safety.  This is an EXCELLENT video and you will have a better understanding of how to fight after watching it.

While I prefer to make punches miss entirely, if I'm going to block them, this would be my preferred way to do it. It's fast, easy, safe, works for multiple punches, can hurt your opponent, and it's easy to transition into counter punches... what more can you ask for.

This is a very solid video that introduces one of the most important fighting concepts that you will ever learn.”  How do you hit someone and not get hit back?  Adding this to your fighting style will increase your chances of winning tenfold.

This is a great counter punch combination, and it builds on our previous weeks two strike combination (The Slip 5-2).  This one adds a vicious hook to the combo... make the guy miss and then hit him with three murder shots.  This video also introduces you to the concept of juggling heads.

The clinch is one of the most amazing things that you can add to your fighting arsenal... I don't care if your'e fighting a pro boxer, if you grab his head, and you know what you're doing, that's the ballgame. In my opinion, the clinch is the EASIEST WAY TO WIN FIGHTS ON THE STREET, and failing to learn this attack style is just straight up bullshit.

This is a very powerful but unorthodox and frequently sloppy looking punch. It has tremendous power and comes from a very odd angle... those who use this punch effectively do a lot of damage.

A Sweet Set-Up For The Overhand Right

I taught a kid this set up who had already decided to do a tough-man competition before I started training him… then he tore his left shoulder to pieces playing rugby. He only had one arm with which to fight… and he knocked the kid out cold. So satisfying...

This video breaks down the form on how to slip common punch combos, and gives you some ideas on how to actually get good at this. I liked watching this video

Great for workouts and smashing someone with repeated kicks from the same side... this technique will be used any time you want to "double-up" a kick on someone.

Then leave a Comment or Question down below... I answer stuff.

Please log in again. The login page will open in a new tab. After logging in you can close it and return to this page.