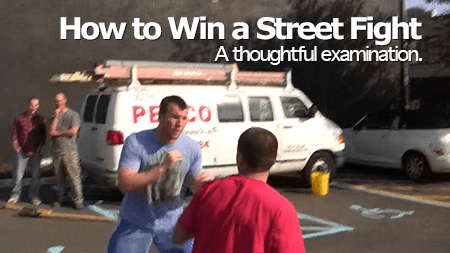 'How to win a street fight' sadly isn’t as easy as memorizing a single method that works 9 times out of 10.

There are certainly general strategies (and techniques) that will work in the vast majority of controlled settings... but "street" fights imply a lack of control.

There are no rules.  There’s no ref to save you.

There are certainly no squishy mats to land on...

You might even be surrounded by actual physical hazards.

Traffic.  Curbs.  Glass.  It's all problematic.

Awareness and the ability to adapt might save your life... or in less serious situations prevent you from looking slightly stranger for the rest of your life.

As your environment changes, your strategy needs to change as well.

For example, if you're fighting on the actual street (or any form of pavement), I would certainly think twice about tackling anyone to the ground; or from a more advanced standpoint, using any type of double leg takedown where your knees hit the ground on your 'shot'.

The street itself can be more dangerous than your opponent.  Watch how quickly a nice takedown turns into a sizable headache:

(We even have thousands of hours of street fighting footage at our disposal on YouTube... which amazingly is not an example of camera phones making us dumber.

We also know what works consistently to win fights in the 'real world', and in the world of Combat Sports (Boxing, MMA, Jiu Jitsu, Wrestling, etc).  All it takes is a little common sense and experience to put it all together.)

The following tips will help you out:

I’m going to assume that you don’t know the guy that you’re fighting.

If you do, it’s good news, because then you might know some of the people that around him... or his 'crew'... so to speak.

Take careful look at the scene and figure out who's on the other guy’s side.

It shouldn’t be too hard; most people are very vocal in the beginning of an altercation, trying to intimidate their way through a fight.  The guy who says nothing and quietly slinks off to the corner is the one you need to watch out for.

That guy is also much less common.

Nevertheless, take note of each one of them, and their position in relation to you.

“The punch you don’t see coming is the one that knocks you out”. 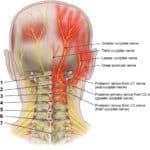 Punches have a much nastier effect when you aren't able to brace yourself for impact.  And getting punched in the Brain Stem is very bad:

The disruption to your Occipital Nerve series alone can cause knockouts.  Then there's the concussive effect on your brain and trauma to the Medulla.  It's all bad news.

This is yet another reason why it's essential to keep everyone in front of you.

It's amazing how stating your intentions can help you to steer a situation and also earn immediate respect from your opponents.  (While certainly not a requirement, respect can help you avoid a fight entirely).

Let's say you survey the scene and you are clearly outmatched by numbers...

If you don't want to get jumped, SAY SO.

Based on the collective response of the group, you’ll probably have a good idea of what you’re up against.

If they say something honorable like, "Yeah, we want a fair fight," you should be ok.

If they say something like, "you’ll get what you deserve," or "better watch who you're dealing with," then you should just expect to get jumped from the beginning.

*An additional little side note*: any time one of the guys has his fists clenched, he probably wants to hit you in the head with them. Watch out for those blatant signs of aggression.

Where are the hazards?

If there happens to be a 2x4 lying around somewhere I want to know where it is in case the sh** really hits the fan.

If someone absolutely needs to grab a 2x4... 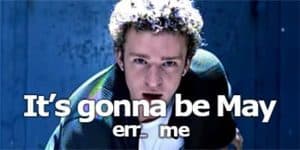 Beyond that, you want to keep the fight away from stuff like glass.  It's bad in its already-broken form, but make damn sure to keep yourself away from fully intact windows and plate glass doors.  Don't get backed up into them.  Damn sure don't tackle people through them.

(I got tackled through a glass coffee table one time... it was a nightmare.

Fun tip for maintaining your even complexion: All of the glass and rocks that end up on a road get pushed to the side by the cars zipping by.  It's best to away from the shoulder.  Get on the sidewalk.  Stay away from the curb.

Keep both feet on the ground when it's slippery.

Avoid fighting from your back on pavement.

I love Jiu Jitsu, and I’ve studied it extensively. I believe that I would win 99 percent of fights that I encounter from my back, but it’s a bad strategy on the street. Not only will you leave a lot of skin on the pavement, it puts you in prime position to get stomped on should anyone else decide to join in.

If you want to use Jiu Jitsu, get on top.

Let the other rub his skin off like a crayon.

I’d much rather not have my bed-sheets peel off my scabs every morning... or have my shower feel like a flame thrower.

Again, get on top.

Build a small handful of devastating techniques, combinations, or set-ups.

It's the most important thing that you need to do, when learning how to win a street fight.

And this doesn't need to be complicated...

You don’t have to learn 'American Boxing' at a high level to learn how to throw a left hook with ridiculous crushing power.  It will take you a week.

You don’t need to be a 'elite' to learn a few quick ways to set up this particular strike (once you've built it).

Have a knockout weapon.

Be confident in this knockout weapon.

This specific 'fight ending confidence' is essential for both winning the actual fight, and your attitude when entering the fight.

If you don't KNOW that you can end a fight at any second, how could you possibly feel good about entering a fight?

People who freeze... people who back down... and people who are overcome with fear, usually don't hold the confident belief that they actually can end the fight if necessary.

These 'feelings' (for lack of a better term) are heavily blunted by having some nice weapons that you're ready to start firing.

There are about 50 such techniques in my Free Video Directory...

Feel free to check it out sometime.

At the very least, you need:

...and a few ways to set them up.  Probably take you 2-3 weeks to make them all effective.

...a few tricks on adding power to each strike from the Basics Section also wouldn't hurt.

It is ridiculously easy to defend yourself against a person who throws one strike at a time.

Defending four punches in short succession is obviously tougher, especially if you send them to different parts of the body.  Send 3 punches to the head and then 1 to the solar plexus.

Make a guy move to protect his liver and send strikes to the jaw.

Out-smart people, by actually being smart.

(Or just memorize 5-10 combinations that were created by smart people.)

Number them in your mind.

If you're in a fight, face-to-face, and you can't think of anything to do... pick a number between 1 and 10, and fire the damn set-up.

You can't stand within an arms reach of your opponent.

That would be absolute chaos.  You stand juuuuuuust outside of each other's reach, and when you want to hit the guy you ENTER.

With a quick blast forward, you're now close enough to throw an attack...

Of course, entering suddenly so that your attack takes the guy by surprise is more challenging.  You also need to enter without getting hit easily.  Moving your head, or moving your entire body laterally (on an "Attack Angle") is a damn good idea.

Don't be right in front of the guy, if possible.  Ever.

Hit him from a position in which he can't hit you back.  It's what attack angles are all about.

That tips the odds in your favor.

Oh... and after you've thrown a combination, EXIT.  Don't just stand there.  Get the hell out of dodge.  Return to distance, where you are safe.

Or step.  Or whatever we're counting.

These 'Parts' are in random order.

Develop at least one strike that keeps the guy away from you.

The jab is the simplest 'distancer'... but the Front Kick is wayyyy longer and more powerful.  Legs are longer and stronger than arms.

This game isn't as simple as just entering whenever you want; you also need to keep that dude away from you and force a calm in the storm if necessary.

Take a lesson from Jesus:

A snappy jab is diabolical.

Look, I don't have a fancy conclusion for you.

You might not have a clue how to do any of the stuff that I mention in this article... but it's all taught on this website somewhere.

Getting off your ass and building these skills is another story.

Pick a step, and get to work.  5 minutes per day can build a machine.

If you have thoughts and opinions,

Leave them down below!

Have a fantastic day.